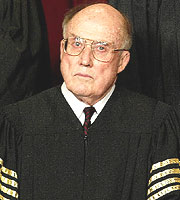 Rehnquist's death opens a rare second vacancy on the nation's highest court and gives President Bush, whose election Rehnquist helped decide, an opportunity shape the makeup of the court for years to come.
"The Chief Justice battled thyroid cancer since being diagnosed last October and continued to perform his duties on the court until a precipitous decline in his health the last couple of days," court spokeswoman Kathy Arberg said in announcing his death.

Rehnquist was surrounded by his three children when he died at his home in suburban Arlington, Va. His wife died in 1991.

Rehnquist was appointed to the Supreme Court as an associate justice in 1971 by President Nixon and took his seat on Jan. 7, 1972. He was elevated to chief justice by President Reagan in 1986.

The death leaves Bush with his second court opening within four months and sets up what's expected to be an even more bruising Senate confirmation battle than that of John Roberts. (Related story: Bush gets rare opportunity to name chief justice)

It was not immediately clear what impact Rehnquist's death would have on confirmation hearings for Roberts, scheduled to begin Tuesday.

The last time there were simultaneous vacancies at the court was 1971, when Justices Hugo Black and John Marshall Harlan retired in September, about a week apart. Rehnquist, then a Justice Department lawyer, urged the Nixon administration to move fast in replacing them and wound up being appointed to Harlan's seat himself.

Rehnquist presided over Clinton's impeachment trial in 1999, helped settle the 2000 presidential election in Bush's favor, and fashioned decisions over the years that diluted the powers of the federal government while strengthening those of the states.

Arberg said plans regarding funeral arrangements would be forthcoming.

Bush was notified of Rehnquist's death shortly before 11 p.m. ET.

"President Bush and Mrs. Bush are deeply saddened by the news," said White House counselor Dan Bartlett. "It's a tremendous loss for our nation." The president was expected to make a personal statement about Rehnquist on Sunday

Many court watchers had expected the ailing chief justice to step down over the summer, which would have given the Senate a chance to confirm his successor while the court was out of session. Instead Justice Sandra Day O'Connor announced her retirement to spend time with her ill husband. Bush chose Roberts, a former Rehnquist clerk and friend, to replace O'Connor.
Rehnquist said on July 14 he would remain on the bench as long as his health allowed.

The president could elevate to chief justice one of the court's conservatives, such as Antonin Scalia or Clarence Thomas, but it's more likely he will choose someone from outside the court.

In his courtroom is was not uncommon for the chief judge to snap at lawyers who exceeded their time. Behind large glasses he would peer down from the bench, sometimes raising his eyebrows to an exaggerated arch at their responses.

But when he set aside his court robes, Rehnquist emerged as a family man and beloved boss who remembered even the tiniest of details about those who worked for him in his many years at the Supreme Court.

He was a lifelong sports fan, trivia buff and a student of history who spoke often to local historical societies.

Rehnquist, who loved to play tennis well into his 70s, announced last October that he had thyroid cancer. He had a trachea tube inserted to help him breathe and underwent radiation and chemotherapy treatments. He appeared frail at Bush's inauguration in January and missed five months of court sessions before returning to the bench in March.

On the court's final meeting day of the last term, June 27, Rehnquist appeared gaunt and had difficulty as he announced the last decision of the term ? an opinion he wrote upholding a Ten Commandments display in Texas. His breathing was labored, and he kept the explanation short.

He had no public appearances over the summer, although he was filmed by television crews in July as he left the hospital following two nights for treatment of a fever.

Rehnquist had an extraordinary career, with many historic milestones.

In 1999, he presided over Clinton's impeachment trial from the presiding officer's chair seat in the Senate, something only one other chief justice had done. A year later he was one of five Republican-nominated justices who voted to stop presidential ballot recounts in Florida, effectively deciding the election for Bush over Democrat Al Gore.

Rehnquist, who championed states' rights and helped speed up executions, is the only member still on the court who voted on Roe v. Wade, the landmark 1973 decision legalizing abortion. He opposed that decision, writing: "Even today, when society's views on abortion are changing, the very existence of the debate is evidence that the 'right' to an abortion is not so universally accepted as (Roe) would have us believe."

He believed there was a place for some religion in government. He wrote the 5-4 decision in 2002 that said parents may use public tax money to send their children to religious schools. Two years later, he was distressed when the court passed up a chance to declare that the Pledge of Allegiance in public schools is constitutional.

"The phrase 'under God' in the pledge seems, as a historical matter, to sum up the attitude of the nation's leaders, and to manifest itself in many of our public observances," he wrote.

Rehnquist leaves without accomplishing the legal revolution he had hoped for as the nation's 16th chief justice. As Rehnquist read it, the Constitution lets states outlaw abortion and sponsor prayers in public schools but bars them from giving special, affirmative-action preferences to racial minorities and women. The court he led disagreed.

In 2003, for example, the court preserved affirmative action in college admissions and issued a landmark gay rights ruling that struck down laws criminalizing gay sex, both over Rehnquist's objections. And last year, Rehnquist disagreed when the court ruled that the government cannot indefinitely detain terrorism suspects and deny them access to courts

Rehnquist was somewhat of a surprise choice when Nixon nominated him to the court in 1971. He was a 47-year-old Justice Department lawyer with a reputation for brilliance and unbending conservative ideology when he was chosen to fill the seat of retiring Justice John Marshall Harlan. Rehnquist, who practiced law in Phoenix before moving to Washington, was the court's youngest member.

For years he was known as the "Lone Ranger" for his many dissents on a then-liberal court that left him ideologically isolated on the far right. Succeeding appointments of conservative justices and Rehnquist's elevation by President Reagan to the federal judiciary's top job in 1986 transformed his role into one of leading and nurturing an increasingly conservative Supreme Court.

Rehnquist was the force behind the court's push for greater states' rights. The chief justice has been the leader of five conservatives, sometimes called "the Rehnquist five," who generally advocate limited federal government interference.

Those five ? Rehnquist and O'Connor, Scalia, Anthony Kennedy and Thomas ? have voted together to strike down federal laws intended to protect female victims of violent crime and keep guns away from schools, on grounds that those issues were better dealt with at the local level. They split, however, in a recent decision upholding the federal government's right to ban sick people from smoking marijuana even in states that have laws allowing the treatment.

The Rehnquist five were together in the Bush v. Gore decision, which critics predicted would tarnish the court's hard-won luster. The closing paragraph of a book Rehnquist wrote on the court's history may stand as his answer to criticism.

Rehnquist noted that the court makes "demonstrable errors" from time to time, but he added, "It and the country have survived these mistakes and the court as an institution has steadily grown in authority and prestige."

Rehnquist, a widower since 1991, dodged questions about his legacy in a March 2004 interview. He said that he tried to keep the court running smoothly and keep the peace among the justices.

Within the court, Rehnquist was a far more popular chief justice than his predecessor, Warren Burger. Liberal Justice John Paul Stevens said in 2002 that Rehnquist brought "efficiency, good humor and absolute impartiality" to the job. Some justices complained that Burger was heavy-handed and pompous.

Rehnquist's grandparents emigrated to the United States from Sweden in 1880 and settled in Chicago. His grandfather was a tailor, his grandmother a school teacher. Rehnquist grew up in Wisconsin, the son of paper salesman and a translator.

He at first had planned to be a college professor, but a test showed him suited to the legal field. In 1952, he graduated first in his class at Stanford University's law school, where he briefly dated O'Connor, the high court's first female justice.

Rehnquist caused great amusement when he departed from tradition by adding four shiny gold stripes to each sleeve of his black robe in 1995. The flourish was inspired by a costume in a Gilbert & Sullivan operetta.

Rehnquist has led a quiet social life outside the court. Until recently, he walked daily, as tonic for a chronic bad back, and played tennis with his law clerks. He enjoyed bridge, spending time with his eight grandchildren, charades and a monthly poker game with Scalia and a revolving cast of powerful Washington men. He liked beer, and smoked in private.

The only chief justice older than Rehnquist was Roger Taney, who presided over the high court in the mid-1800s until his death at 87. Rehnquist was also closing in on the record for longest-serving justice. Only four men were on the court 34 years or longer.
You must log in or register to reply here.
Share: Facebook Twitter Google+ Reddit Pinterest Tumblr WhatsApp Email Link
Top