Is ICHIRO a good player?

If he came up into MLB instead of Japan, I think he could have soared past Pete Rose's all-time hits record.

what kinda question is this?

The national sports media doesn't even know who this guy is.

Everything is A-Rod, Jeter, Shilling, Manny, Ortiz, Soriano, Pujols, etc. Not a word about a super-stud hitter. I remember watching Carew, Yount, Rose, and Ichiro is the same guy as them at the plate if not better.

i forgot, seattle is your fav team. carry on.

I tea-bagged Lou Pinella after he shaved runs to go under on my Total Of The Year.

It was a rough night for Seattle center fielder Ichiro Suzuki, who still stretched his hitting streak to 19 games with an infield RBI single in his last at-bat in the ninth.
Click to expand...

Suzuki tied it with a bolt into the right-center seats on Bedard's first pitch. It was Suzuki's 25th career leadoff home run, tying him with Brian Downing for 14th on the career list.
Click to expand...

Good player. Anyone with a brain knows this.


Suzuki extended his hitting streak to 15 games with a single on the second pitch of the game from Saunders.
Click to expand...

Ichiro Suzuki was 1-for-4 with a first-inning single that extended his hitting streak to 23 games, equaling the second-longest of his big league career and putting him within two of the franchise record he set in 2007.
Click to expand...

Suzuki extended his Mariners record hitting streak with a single off rookie Brad Bergesen in the third. He is three games short of the longest hitting streak in the major leagues this season, by Washington's Ryan Zimmerman. 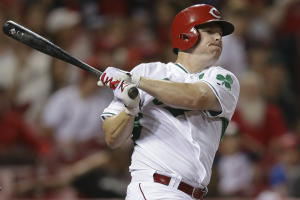 Ichiro Suzuki pinch hit in the eighth, completing his ballpark circuit. Great American was the only current ballpark he had never played in. It's the 40th ballpark/stadium he's played in during his career.
G

he was good at it.
G

"There's nobody like Ichiro in either league—now or ever. He exists strictly within his own world, playing a game 100 percent unfamiliar to everyone else. The game has known plenty of 'slap' hitters, but none who sacrifice so much natural ability for the sake of the art... Ichiro, a man of wondrous strength, puts on impressive power-hitting displays almost nightly in batting practice. And he'll go deep occasionally in games, looking very much like someone who could do it again, often... [but] the man lives for hits, little tiny ones, and the glory of standing atop the world in that category. Every spring, scouts or media types write him off, swearing that opposing pitchers have found the key, and they are embarrassingly wrong."
You must log in or register to reply here.
Share: Facebook Twitter Google+ Reddit Pinterest Tumblr WhatsApp Email Link
Top