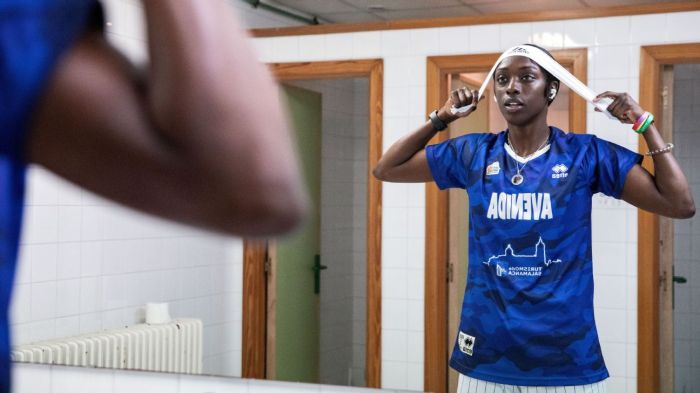 The overseas experience can be lucrative for women's basketball players, but it's not without its sacrifices


Interesting article about their intl play and how much more fan interest is there is in their game, over there

This is unusual.....our boys may not win every game, but they usually beat the number.

Anybody have any clue where they went wrong tonight?

Staff member
Looks like Diggins-Smith will be sidelined with an illness tonight.

We can still get there with Phoenix.

Dallas only plays in spots and they can get disconnected as a team for long stretches of time.

This is unusual.....our boys may not win every game, but they usually beat the number.

Anybody have any clue where they went wrong tonight?
Click to expand...

Now I have Minnesota +7.5 first half
C

John Kelly said:
You only eat what you kill.

Shame on the ladies.

Capitalism is the ultimate meritocracy. The WNBA is yet another example of any PR is good PR and corporate socialism.

Staff member
No bueno with Phoenix.

Feel sabotaged by the Diggins-Smith illness.

What an empty feeling when the number starts falling and you laid it at the high point.

Apologize to those who tailed the limp selection.

How do you know it was a dead side?

Painful to track the score updates.

I'll watch the replay off League Pass tomorrow as punishment for the loser.

Is Diggins really worth 3 points to the spread?

Heim said:
Is Diggins really worth 3 points to the spread?
Click to expand...

Plus, the Phoenix roster is missing the Russian prisoner, making Diggins-Smith all the more valuable.

Copper back for Chicago.

svbettor said:
sorry I got this morning I think ML has some value too +125

Staff member
The WNBA is in a tough marketing spot.

Do responsible parents of young sons or daughters under the age of 12 want to expose their impressionable children to the rampant lesbianism among the players in the league and fans in the stands?

It's a tough question, but it's a fair question no one is brave enough to ask.

I think soccer has taken over for young woman. Now with the recent court ruling that woman
can be paid equal to men, it might steer even more parents to soccer.

Sure, lesbians in soccer too. But it's rampant in basketball.

Staff member
Years ago, the WNBA ignored the gay community in their advertising efforts.

Now, it's all about the the LGBTQ community.

Early in the WNBA timeline, I remember Sue Wicks was the only WNBA player who was an admitted lesbian.

Now you have countless married couples playing in the league.

There are too many people modeling WNBA that is why the limits are low.

Think thats bad,Nascar limits at Cris are $250 at Circa $2000 Cris's nascar trader is like kernel sanders, chicken.

Geez, her game has picked up ever since she joined the lesbian union.

Staff member
Marvelous skill set for a player her size.

She was clearly a better female basketball player than Shelden Williams was a male hoopster.

Parker now is riding a wave of business success never before seen in the gay community.

Billie Jean King and Martina Navratilova lost sponsors because of their sexual preferences.

Parker seems to be gaining allies.

Staff member
By the way, Parker's wife was an accomplished hoopster in her own right.
M

what do the legal places take on WNBA sides?

MrTop said:
what do the legal places take on WNBA sides?
Click to expand...

John Kelly said:
You can bet $1,100 on WNBA sides at most sports books in Las Vegas.
Click to expand...

Low limits on all sports.

I was surprised they did not offer a race book.

Diggins is probably the only player in the league that
can say she was sidelined by a bad weiner.

Hit the UNDER 1H... going for the Full Game Under

svbettor said:
Hit the UNDER 1H... going for the Full Game Under
Click to expand...

Hit both Bang bang
A

Crafty lefty finally living up to her potential.