11:30 am EST/8:30 am PST (ESPN)—Time for an English Premier League match and my favorite club to back right now, Leicester City, who went 3-0-0 in November, winning all 3 EPL fixtures by 2-0 scorelines (B&H-ARS-CP) after a 3-0-1 October which saw the Foxes outscore opponents 15-4 and make a move toward their current 2nd place league standing after losing 2-1 vs EPL-leaders Liverpool at Anfield on Oct. 5. Steam has moved this line from -112 to as high as -160 in some joints (Wednesday) and with the recent Form 16th-place Everton (+410, Draw +310; 2½o -120) has shown (2-1-6 L9), it’s no wonder punters and bettors and cunters and fretters are backing the hosts at King Power Stadium (Desso Grassmaster) on Filbert Way on Sunday.

Lifetime in this series in EPL play, Jamie Vardy and Leicester City are 22-15-13 vs Everton at Home (89 GF-64 GA) but lost 2-1 to the Toffees last season in this spot. But with a sweet scoreless streak in November intact and GK Kaspar Schmeichel and the boys back at Home and on a roll, it seems more likely that Vardy (4/1 to be EPL Scoring Leader, Westgate Las Vegas SuperBook) will be able to score than maybe the entire Blues squad whose leading scorers are Richarlison (3 goals) and Dominic Calvert-Lewin (3 goals). 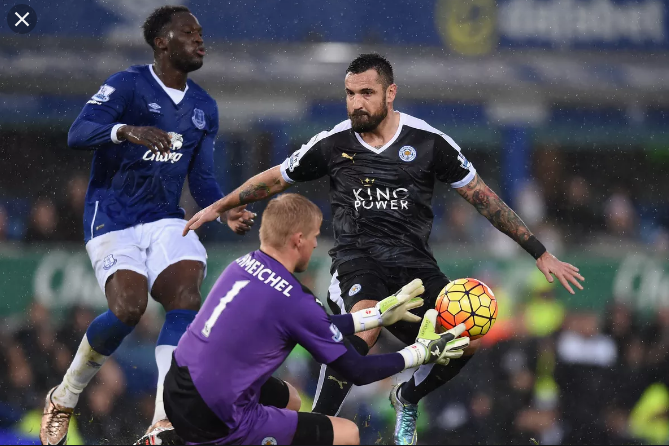 ​
Two Foxes—Vardy (12 goals) and Ayoze Pérez 4 goals)—scored 3 goals each in a 9-0 pasting of Southampton on Oct. 25. Only one team in all competitions—Liverpool (2)—has scored more than one time on the D-minded Foxes who have allowed the least number of Goals in the EPL (8). This one could possibly go 0-0 for some time, so the Under 2½ seems logical with LC having not allowed more than 2.0 gpg in a perfect November (3-0-0, 6 GF-0 GA) and despite the swoon, Everton is a game opponent who are desperately looking to avoid Relegation Talk (and possible Relegation) in 2020.

Twenty-one-year-old MF Harvey Barnes (4 assists) has been a breath of fresh air for the Foxes and may figure in the first Goal here but the biggest handicapping realities here are 1—LC chasing LFC, 2—The scoreless streak and, 3—The Site. The Foxes (9-2-2) and Manager Brendan Rodgers will use last year’s Loss here as motivation not to be caught off guard in Matchweek 14.

this is strictly a fade on the worst goalie in hockey(Hutchinson) who is expected to start
Click to expand...
I played Leaves PL the other way. Not knowing this would be the case. Might wanna look at Over here