This child of the 1970's is learning Spanish (Español) while spending the next 60 days (sesenta dias) in beautiful (hermosa) Costa Rica.

I've always admired others who are bilingual and now I'm striving to join that worldwide club.

Studies claim more than half of the world's population is able to speak more than one language.

My Spanish vocabulary is building to approximately 500 words but my ultimate goal is to speak like a Latin American native.

After all, is someone truly speaking English if they're speaking broken English?

I've been told 1,000 Spanish words account for more than 85% of all spoken Spanish.

Once my vocabulary strengthens, the next step is to speak in full sentences.

Through observation, I have an understanding of Costa Rican culture.

The people here are gentle and friendly.

Costa Rica does not support a national military (the army was abolished in 1948) which corresponds to the passive nature of its people.

A recent conversation with a Costa Rican business owner underscores the priorities of the local population.

The above conversation would never take place in the States.

No one in America is conditioned to be happy with mediocre business results.

Americans need to reset their clock and their expectations when they arrive in Costa Rica.

One United States ex-pat told me, "Nine o'clock here means 10 o'clock. They call it 'Tico Time.' If a Tico tells you that something will get done mañana, it doesn't mean it will get done tomorrow, it merely means it will not happen today."

La Sabana Metropolitan Park is the country's largest and most significant urban park located in the capital city.

The state-run public recreation area, created in 1977, is considered by some to be "the lungs of San Jose."

It is positioned at the west end of the city's bustling business district, adjacent to National Stadium (Estadio Nacional) and a stone's throw from one of the largest bookmaking operations (BetCris) in the world.

A large man-made lake at La Sabana Park is surrounded by soccer fields, tennis courts, basketball courts, an outdoor track and a gymnasium.

Like most Latin American countries, soccer is Costa Rica's most popular sport with cycling, surfing and combat sports battling for the country's runner-up spot.

Neighboring countries Panama and Nicaragua love the sport of baseball, but for some reason, Costa Ricans never gravitated to America's pastime.

(Ironic sidenote: For a country with little or no connection to Major League Baseball, Costa Rica is home to a Rawlings factory that annually produces more than two million hand-stitched baseballs, about half of which make their way to MLB ballparks)

My basketball-playing experience with young Costa Rican kids (ages 8-12) reinforced my view of the country's nonchalant attitude toward competition.

In a game of three-on-three basketball to a score of five, two young kids (niños) wanted to rest in the shade with the score tied at two.

Another one called for a water break (He cried, "Agua! Agua!") when the score reached 4-3.

Surprisingly, none of the players on the winning team cheered when the final basket was recorded.

Imagine these undersized Costa Rican boys competing against trained American kids whose well-heeled parents are cheering from the sidelines as highly-paid coaches with access to first-class facilities bark out orders during cutthroat competition.

It now makes perfect sense that more than 20,000 U.S. expatriates, many of them retirees, call Costa Rica their adopted home.

After years of working hard and saving for tomorrow, they're choosing to opt-out of America's rat race.

The relaxed lifestyle in a tropical climate compares favorably to the hectic American goals of married life with a house for the kids, a school for the kids and tuition for college.

Obtaining an education, acquiring a solid work ethic and earning a good living in the United States is the advantage play.

But upon retirement, enjoying life in a tropical paradise is the preferred choice.

#2
brings back many fond memories of living in San Jose for nearly a decade.....more good times than bad....

Good luck with the language JK....always wished that I would have learned more....

Staff member
#3
Thanks for checking in, VD.

I'll serve as your tour guide when you decide to make the trip here. 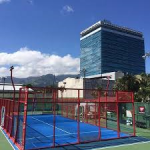 #8
John Kelly said:
View attachment 7460072
Click to expand...
this is platform tennis which is popular on the east coast

Staff member
#9
What's the difference between platform tennis and pickleball?

#17
most tennis players per capita is Atlanta, Ga

#19
Hey John, GL learning Spanish. Living where I do Hispanics make up a large portion of the population, and knowing how to speak Spanish is something I wish I knew

#20
Who says you can't teach an old dog new tricks? US! Mom rescued a dog in Dec, 2016. She was told it was 4. The vet said 6. We have tried teaching it to do some things but have been met with heavy resistance. She is now 9(ish) and we know trying to teach her new things just ain't gonna happen.

I took 3 years of Spanish in HS and 1 in College. I can get by but my Spanish is not Muy Bien. The one thing learning Spanish did do was improve my English since many of the concepts for both are very similar. The one thing I did learn is that calling a woman "Puta" is not something you should do. They tend to get VERY upset when you call them that and if they are with a guy the odds of him charging you and wanting to beat you to a pulp are pretty high.
R

#21
JK, buena suerte with your espanol. i wish i could speak Spanish myself. Only know a few words. Just being able to converse a little bit in Spanish enhances one's experience greatly.

#22
a very good overview of a different lifestyle....JK has shared everything about his travels there except why he goes. Maybe it's the
reduced vig.

#23
Heim said:
a very good overview of a different lifestyle....JK has shared everything about his travels there except why he goes. Maybe it's the
reduced vig.
Click to expand...
I had always thought he gets information on sharp action from the books.
Nothing illegal about it. Gathering good information is a key to every successful business.

I’ve followed some YouTube expat stories, mainly from Panama, and it seems like it’s a game for the locals to take money from gringos.

One shocking story in particular was a case where a girl was trying to board a flight home to the U.S. but when she was checking in at the airport it was discovered her passport wasn’t stamped with her entry to Panama from months beforehand. So instead of boarding her flight, the police escorted her by car to the border where she had to get an entry stamp on her passport and pay a fine of about $1000 dollars. She also missed her flight.
This is just one example of what the authorities can lawfully do to expats.
R

#24
John Kelly said:
Thanks for checking in, VD.

I spend most of my time in San Jose.
Click to expand...
Ha Ha. You stole my line JK. Costa Rica is a beautiful country but not San Jose. San Jose is a crowded, noisy, horrible traffic, car horns and car alarms going off 24/7. Sidewalks you have to walk on are in terrible shape.
With that said i been to Costa Rica three times. Never been to the beautiful parts, always stayed in San Jose. In conversation people would ask me about Costa Rica, isn't it Beautiful? i would reply, i hear it is but i only go to the gritty part San Jose. i like gritty. i always have tons of fun in gritty places.

What a great word.
S

#26
John Kelly said:
Thanks for checking in, VD.

Staff member
#27
My private collection sent to you via text messaging wasn't enough?

#28
Jk, are you using Rosetta Stone or Babbel to learn Espanol?
C

#29
Valuist said:
Jk, are you using Rosetta Stone or Babbel to learn Espanol?
Click to expand...
Neither, "Spanish for Dummies".

#31
Almost Allright said:
How do you say “where are my shoes” in Spanish?
Click to expand...
I wonder if it would make a difference for shoes that one wears on their feet, or shoes that distribute cards for table games in a casino?
C

#33
kane said:
Hey John, GL learning Spanish. Living where I do Hispanics make up a large portion of the population, and knowing how to speak Spanish is something I wish I knew
Click to expand...
same here they are like cockroaches

#34
Hispanic women we see the most in NJ

Staff member
#36
TobyTyler said:
Hispanic women we see the most in NJ

1) Peruvian - nice skin, slim/athletic builds
2) Dominicans - best for sex but the fucking craziest of them all. will wreck your life then stomp on corpse. dark meat.
3) Columbia - great bodies, are quick to cheat on low income husbands
4) Argentina - prettier faces than most
5) Brazil - thick whores disguised as strippers. usually smaller tits.
6) Puerto Rican - questionable hygene, low class
7) Mexicans - short and plump, not much redeeming value
Click to expand...
Quite the scouting report, Toby.

As Michael Bloomberg might say, "I do not endorse this message."

My best lessons come from interactions with the locals.

Easier to remember words when you connect them to a person or activity.

Staff member
#38
ComptrBob said:
Neither, "Spanish for Dummies".
Click to expand...
Funny but not nice.

Staff member
#39
Played hoops today with a bunch of young Central American kids at a playground near the airport.

I've been told to never assume every young boy here is from Costa Rica.

Plenty of Nicaraguan refugees, some kids from Venezuela and others from Honduras.

#40
John Kelly said:
Played hoops today with a bunch of young Central American kids at a playground near the airport.

I've been told to never assume every young boy here is from Costa Rica.

Plenty of Nicaraguan refugees, some kids from Venezuela and others from Honduras.

Just like Americans who don't care for refugees from Central America, Costa Ricans don't appreciate foreigners from troubled countries crossing the border and undercutting the pay scales established here.
Click to expand...
When I lived in CR, the natives always blamed the Nicos and others for their shortcomings in the economy....they also received much criticism for the crime....the police were grossly underpaid back then....not much they could do......forced the police to becoming more corrupt....heard things have improved a little.....
You must log in or register to reply here.
Share: Facebook Twitter Google+ Reddit Pinterest Tumblr WhatsApp Email Link
Top