Embarrassing situation for the Fever.

Candice Dupree swings the ball to the left side for a Tiffany Mitchell corner three.

What does Mitchell do?

She fakes a shot, steps inside the arc and shoots a 15-foot baseline jumper as time expires.

Reminds me of the time UNLV was trailing by 3 late in the game. They had the ball. One of their players (Greg Anthony/Anderson Hunt - someone like that) had the ball with an open 3-pointer. Instead they drove it to the hole for a layup and they lost by 1

JK.....'be the team' would have helped. 3 huge efforts games at home.
Something had to give.

#445
Taurasi looked like crap tonight... physically and her play. Hoping this is her last season....

Coming off minor back surgery, if there is such a thing.

Staff member
#447
Will be watching all the WNBA action tonight.

Only one game Saturday: Las Vegas at Washington.

EDD has a broken nose.

No Candace Parker tonight as she nurses a sore ankle.

Teams are shooting .417 from the field this season, the lowest field-goal rate since the 2003 season.

Sparks led by six after one quarter, by 10 at halftime and by 24 after three quarters.

The Sparks hit the Fever with an 21-3 run to start the third quarter.

The Fever scored 30 of the game's final 39 points, including the last 16 points of the game in the final three minutes.

But the Fever committed 20 turnovers at home.

Tamika Catchings should take over the team.

Chatman used all 12 players in the blowout and no player logged more than 24 minutes.

The Ogwumike sisters were both 9-for-17 from the field.

No interior defense for the Fever.

Rookie Kalani Brown appears to be improving for the Sparks.

Awful shooting night for both teams.

Atlanta outscored Minnesota, 23-21, in the second half.

My favorite Minnesota player is rookie Napheesa Collier, who lost only five games during her entire college career at UConn.

The Dream never trailed and enjoyed their biggest lead at 11 points.

Atlanta has now won three of its last four games after opening the season 2-9.

Hard to support either team exiting this game, however.
Last edited: Jul 13, 2019

Coming into the game, Chicago had lost four of five while New York had won five of six.

Curiously, New York's Asia Durr did not play but she dressed.

The Sky exited a "stinging loss" to the Minnesota Lynx, according to Chicago head coach James Wade.

Numbers are not important, efficiency is everything.

Some players get their numbers (points and rebounds) but are they meaningful and are they accomplished efficiently within the team's system?

A crowd of 7,221 at Wintrust Arena for Friday night's game.

Still, he offers outstanding commentary compared to most other WNBA analysts.

No player in the league takes more jump shots with a foot on the 3-point line than Chicago's Jantel Lavender.

Chicago played its best game of the season as all five starters finished in double figures.

Team shot an incredible 54% from the field.

Do not bet against the Sky anytime soon.

New York's Amanda Zahui B., Bria Hartley and Marine Johannes are back from EuroBasket 2019.

Astou Ndour returned to the Chicago bench after winning the MVP of EuroBasket2019 while representing Spain.

Ndour is a back-up post player for the Sky.

She scored no points in 12 minutes of action.

Makes you wonder about the quality of European women's basketball.

Kia Nurse, my favorite player on the Liberty, scored 11 of her team-high 18 points in the first quarter.

Nurse's father played in the CFL and she is the niece of former NFL quarterback Donovan McNabb.

Chicago hit New York with a 28-2 run over the final seven minutes of the first half.

Why doesn't Diamond Deshields play with the edge she displayed against New York all the time?

Chicago should put New York on the schedule for every game.

Because of the blowout nature of the game, no Chicago starter played more than 30 minutes.

Chicago's first-round draft pick Katie Lou Samuelson, featuring a heavy black wrap on her right hand, played the final 6:52 of the game, logging a -11 in the plus/minus department.

Her only shot was an air ball.

Chicago head coach James Wade has been preaching to his team, "I'm tired of us being mediocre."

#452
Congrats to Jewell Loyd for being named as a WNBA All-Star starter. I used to date one of her aunts a number of years ago. Jewell was just a little kid back then but very accomplished as both a tennis player and bball player. She honed her skills playing against her older brother, who would go on to start at point guard for Valparaiso.
Last edited by a moderator: Jul 13, 2019

Staff member
#453
Valuist said:
Congrats to Jewell Loyd for being named as a WNBA All-Star starter. I used to date one of her aunts a number of years ago. Jewell was just a little kid back then but very accomplished as both a tennis player and bball player. She honed her skills playing against her older brother, who would go on to start at point guard for Valparaiso.
Click to expand...
Good story, Valuist.

Jewell belongs in the Notre Dame Athletes Hall of Fame but until she graduates, the school does not allow her to be enshrined. 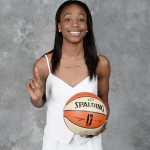 Diana Taurasi makes her seasonal debut after undergoing back surgery on April 24.

She was cleared to play last week but suffered a slight hamstring injury during practice.

The Sun enter the game with a five-game losing streak.

Game tied at 17 after one quarter.

Taurasi played only 16 minutes (12 minutes in the first half) and went 0-for-4 from the field.

DT shied away from contact on the defensive end of the floor.

She served as more of a facilitator (four assists) than a scorer.

Hard to find an ABC or ESPN nationally-televised game without at least one female official and one African-American official.

DeWanna Bonner scored 20 points for Phoenix but no other player had more than 10.

Phoenix was 2-for-16 from beyond the arc.

The Sun scored the first 13 points of the second half.

I like the announcing team of Pam Ward and Rebecca Lobo calling the game.

Ward does her homework and Lobo offers excellent insight.

Sancho Lyttle missed the last 18 games last season with a torn ACL and she re-injured her left knee early in the third quarter in a collision with Jonquel Jones.

Lyttle may never return to a WNBA court.

Phoenix cut the Connecticut lead to three at 57-54 but then Essence Carson missed a layup and Alyssa Thomas raced the length of the court for a layup and one.

Jonquel Jones hit a 3-ball on the subsequent possession.

Staff member
#457
choslamshe said:
Huge news...will she play tomorrow? Weird matchups tomorrow but love the 5-game slate
Click to expand...
Who do you like, Cho?

Staff member
#459
Natasha Howard has been married to Jacqueline for the past two-and-a-half years.

Get the divorce papers ready.

Staff member
#460
The WNBA is already under fire for lack of punishment for a player involved in another alleged instance of domestic violence. Los Angeles Sparks guard Riquna Williams was arrested for aggravated assault with a firearm and burglary in a case involving her ex-girlfriend back in late April for an incident that occurred in December 2018. She faces two felony charges in Palm Beach County, Florida. Her next court date is set for August 16.

#461
John Kelly said:
Who do you like, Cho?
Click to expand...
Without any overnights, a few I'll be looking at in the morning:

Site: American Airlines Arena on the campus of the University of Washington.

Dallas started the season 0-5, but then went 5-4 over its next nine games.

Coaches are friends of nearly 40 years.

Dan Hughes is a disciple of Brian Agler's.

Izzy Harrison (concussion) did not dress for Dallas.

The Wings are limited offensively, dead last in the league in 3-point shooting percentage.

She played her college ball in this gym.

Whitcomb was 1-for-9 from distance in Seattle's last game.

Seattle finished the game with 14 3-pointers from 23 attempts for a 61% rate from beyond the arc.

The Wings are still winless (0-7) on the road this season.

Seattle announcer Dick Fain said the Storm looked as fresh as they have all season long.

Fain mentioned Seattle head coach Dan Hughes and his ability to prepare his team after an extended layoff.

Seattle recorded 28 assists on the night from 34 made baskets.

Mosqueda-Lewis is back with the team after missing time with an ankle injury.

Staff member
#464
choslamshe said:
Without any overnights, a few I'll be looking at in the morning:

LA/Atlanta Under
Conn/Indiana Over
Liberty +
Click to expand...
I don't follow the totals as closely as you, Cho.

I assume Natasha Howard will play for Seattle tomorrow.

Sancho Lyttle did NOT suffer a career-ending knee injury against Connecticut last Friday.

But she will not play Sunday against Minnesota.

Diana Taurasi is also doubtful after tweaking her back and knocking knees in her seasonal debut.

The Sparks seem to get a more focused effort with Parker on the sidelines.

Staff member
#470
choslamshe said:
Without any overnights, a few I'll be looking at in the morning:

LA/Atlanta Under
Conn/Indiana Over
Liberty +
Click to expand...
The UNDER in the Sparks-Dream game survived an overtime session.

Staff member
#472
Heim said:
2H by Sky one of the better halfs I've seen this season. Geez at one point 22 assists on 27 baskets made.
Click to expand...
You don't miss anything, HEIM.

#473
John Kelly said:
The UNDER in the Sparks-Dream game survived an overtime session.

Staff member
#474
Plenty of pace and plenty of opportunities but no points today in Atlanta.

Teams combined for 159 field-goal attempts in the 45-minute game.

Staff member
#475
No games today or Tuesday in the WNBA.

Easy league to follow with only 12 players on 12 teams.

Most teams feature a regular rotation of 8-10 players.

So many injuries in the league this season.

I know the product well and I'm just waiting for Wednesday morning for the early numbers to appear.

There's a game this Friday between Atlanta and Connecticut which should be a low-scoring contest.

I expect the total to hit the board in the low to mid-150's.

Fourth meeting between the two teams over the past six weeks.

Phony final last time around when the teams combined for 14 points in the game's final 39 seconds.

#476
Is Arike Ogunbowale the rookie of the year?

I prefer Napheesa Collier of the Minnesota Lynx.

I don't look at stats a lot, but Ogunbowale is a high-volume shooter.

Staff member
#478
If you've been betting underdogs and unders in the WNBA this season, your account balance is looking good.

#479
The Williams suspension is going to hurt Sparks perimeter game, plus their best perimeter defender.