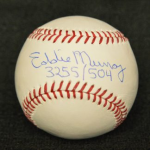 Eddie Murray's autograph reveals two of his greatest accomplishments in the game of baseball.

"Steady Eddie" adds "3255/504" to his signature, detailing the number of hits and home runs during his productive 21-year career.

Murray stands alone as the only switch-hitter in baseball history to be a member of both the 500-home run club and 3,000-hit club.

Murray was rightfully voted into the National Baseball Hall of Fame as a first-ballot inductee in 2003.

In a word, his career was complete.

Fittingly, a bronze statue of Murray in his low-crouched, left-handed hitting stance sits outside Oriole Park at Camden Yards in downtown Baltimore.

But my favorite Eddie Murray contribution to baseball comes in the form of a quote when asked about the sport that brought him both fame and fortune.

The soft-spoken Murray recognized only one problem with the game of baseball.

Some historians cite Abner Doubleday as the inventor of baseball while other historians credit Alexander Cartwright as the founder of the game.

Either way, Murray believed the pioneers of the game misnamed the sport, creating an incomplete picture of what would later become the national pastime.

Murray said, "The game should have been called Adjustments."

High atop Guaranteed Rate Field, we sat in amazement at the lack of adjustments by big-league hitters to the countless number of defensive infield shifts that now dominate the game.

WILDBILL, a forward-thinking gaming consultant who travels across the country and around the world analyzing the financial viability of casino projects large and small, posed the key question in a dejected tone: "At what point in time are today's hitters going to adjust to these computer-generated defensive shifts?"

WILDBILL continued, "The hitters talk about adjustments, but they don't have an answer for defensive shifts."

All the numbers support WILDBILL's disappointment.

For instance, left-handed batters who hit the ball on the ground to the right-field side of second base are averaging .111 over the past three-plus seasons.

Here's another game highlighting a lack of adjustments, this time from Wrigley Field four days later on May 28, with Adbert Alzolay and Vladimir Gutierrez serving as mound opponents in a Cubs-Reds contest.

The over/under was listed at 7 runs with forecasts calling for winds blowing straight in from center field at 18 miles per hour.

By first pitch, the gusty winds had picked up.

Cub utilityman David Bote claimed the stiff winds were the strongest he had ever seen at Wrigley Field.

So you would think players would abort their launch-angle strategies and uppercut hacks and put the ball in play, advance a runner or two and look to create runs in any conceivable way?

The players failed to make any adjustments to the gusty wind conditions and applied their usual swing-from-the-heels approach.

Big egos and no small ball are at the forefront of today's home-run-happy version of the game.

Bote's line-drive home run down the left-field line cut through the wind in the fifth inning to provide the only run of the game.

Interestingly, UNDER 7 was not the only cinch winner of the day.

Every gambler who bet UNDER in live betting at any point during the game won their wager.

Turns out, the hitters were not the only ones who failed to adjust to the strong wind gusts.

The in-game algorithms that power live wagering were slow to adjust as well.

The live total was interesting to track: After one full inning of scoreless baseball, the total was reduced from a pregame total of 7 to 5.5 runs.

And therein lies the hole in the computer-generated oddsmaking process.

Considering the favorable pitching conditions and adverse hitting conditions, a live total of 4.5 runs after one full inning would have been a better-priced option.

Because of the faulty opener and slow adjustment, the live total never caught up to the right price.

Sharp sports bettors are always adjusting not only to the changing nature of the play on the field but also to the adaptive nature of the betting marketplace.

In the gambling world, the truism translates to "Adjust or Go Broke."

The Bucks did not take advantage of James Harden's absence in Game 1.

Harden left the series opener with a nagging hamstring injury only 43 seconds into the game.

Not surprisingly, Kevin Durant (29 points) and Kyrie Irving (25 points) picked up the slack for their fallen teammate.

The Nets also received big games from Joe Harris and Blake Griffin, who combined to go 9-for-18 from beyond the arc, a scenario unlikely to repeat itself in Game 2.

Milwaukee, on the other hand, shot 6-for-30 from distance and displayed poor game control throughout the second half, getting outscored 35-23 in a decisive third quarter.

Even the eight-point margin of victory was deceiving as Milwaukee scored the final 11 points of the game in garbage time.

No matter the sport, I love to support good teams off a bad loss and Game 1 was a lackluster performance by the normally-explosive Bucks.

What's more, Game 2 is a road game with no travel.

Milwaukee head coach Mike Budenholzer said after the Game 1 loss in Brooklyn, "We've got to be better. We will be better Monday."

I think that the Bucks miss the Villanova kid more than you realize...

I think that the Bucks miss the Villanova kid more than you realize...
Click to expand...

"The Greek Freak" called Donte DiVincenzo "the heart of the team."

It would be pretty cool to go back in time to watch the old school play. Maybe be a ghost.

I forgot about Ken Singleton.

If memory serves, he had a high swag factor.

IWishIWasAPro said:
It would be pretty cool to go back in time to watch the old school play. Maybe be a ghost.
Click to expand...

Planning a trip to "The Field of Dreams" movie site later this month.

The White Sox and Yankees will play a regular season game in Dyersville, Iowa on August 12.

A stop at Iowa Greyhound Park in nearby Dubuque is also on the itinerary.
Last edited: Jun 7, 2021

I give Nets a lot of credit. A guy like Harden goes down early.....it's not enough time to adjust
emotionally and on the court. They pulled away.
O

It's not just baseball, basketball, or sports betting that's about adjustments.

It's life in general. The plan never goes according to plan.

Darwin would have been a great sports bettor.
M

It's not just baseball, basketball, or sports betting that's about adjustments.

It's life in general. The plan never goes according to plan.

Darwin would have been a great sports bettor.
Click to expand...


Darwin would have adjusted on DNA, could have ran an audible.
Last edited by a moderator: Jun 7, 2021
C

Staff member
The Bucks failed to show up tonight.

They'll get paid but I will not.

In that game the Sox starting hitting when they started making adjustments to their 2 strike hitting approach as we noted. In the early innings they were still going for the launch angles and trying to put up stats which would get them paid. But after about the 5th inning when the no no attempt by Lynn was broken up they started playing like a team trying to win a game and got some crooked inning scores.

Weird team the Sox are as I observed to JK. I had no idea who their "stars" are and I have no idea what they are trying to do collectively. They seem to alternate low average wannabe bashers and high OBP players. I guess LaRussa is changing the 3-run homer strategy to a 2-run home strategy in light of the lower-scoring game. If that's the best of the AL, well good for them but it seems like the most inconsistent effort at piecing together a contender I can remember. Some proven vets out there getting paid along with a lot of graduated prospects and guys trying to prove they were good prospects. The field is wide open though. Yanks might seem formidable in October, but they sure are prone to losing streaks which will get you sent off from the playoff field in a snap.

And how about a manager who appeals to old-timers in Tony LaRussa (age 76).

And how about a manager who appeals to old-timers in Tony LaRussa (age 76).
Click to expand...

Cubs fans are 75% alcoholic and 50% wife-beaters. Who on the Cubs represents them?
M

WildBill said:
Cubs fans are 75% alcoholic and 50% wife-beaters. Who on the Cubs represents them?
Click to expand...

And how about a manager who appeals to old-timers in Tony LaRussa (age 76).
Click to expand...

LaRussa also appeals to my bookie when he keeps playing for one run vs the Tigers.

WildBill said:
Cubs fans are 75% alcoholic and 50% wife-beaters. Who on the Cubs represents them?
Click to expand...

Strange thing about the Cubs is they have all these legends or at least guys everyone remembers well from the losing teams or guys like Sandberg who got one shot at the playoffs. Ten years from now, who will be the Cubs legend from the team that actually won it all?

WildBill said:
Strange thing about the Cubs is they have all these legends or at least guys everyone remembers well from the losing teams or guys like Sandberg who got one shot at the playoffs. Ten years from now, who will be the Cubs legend from the team that actually won it all?
Click to expand...

Bryant/Rizzo. Few remember now that Mike Montgomery got the save in Game 7.

Staff member
Bryant/Rizzo is the right answer for the majority of Cub fans.

That's the real Javy, not to be confused with EOG's version, JavyBaez9.