A hedge fund manager, as you proclaim to be, gathers all the info and makes a decision on
the profitability of any venture.

You let someone else determine that. Then as history shows, throw them under the bus
when it goes south. 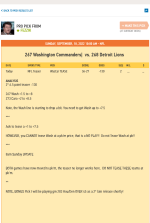 You pay....ready to fire game day, but Fezzik says no play but he gets graded on a vanished number.

You can talk to any sportsbook director 90 percent of the volume comes in game day.

What are you paying for?

I had Washington in a tease, it lost because their kicker missed a PAT at the very end

Krack is an originator in the same way I'm the stunt double for Marcus Spears.

Sportsrmylife said:
Krack is an originator in the same way I'm the stunt double for Marcus Spears.
Click to expand...

I'm not so sure. He has quants that work for him. I know on 1st 5 MLB he's first in line when they're up in the morning.

The other stuff, I don't know. But he's not a deep follower like Fezzik.

I know, I know, I'm the B2B champ and there are two NFL games but there are better (bets) high vig props and derivatives for me to inflate my units.

I am up 90 UNITS YTD. I CRUSHED all weekend.

You are an IDIOT>

F HEIM. I am taking out ALL the Carolina +3 hosting Az before he gets ANY
A

YTD +91.57u. This year could end up over the +100 mark. Time to raise the BLAP price? Do that consistently and you could charge the moon.

andyfezzik said:
YTD +91.57u. This year could end up over the +100 mark. Time to raise the BLAP price? Do that consistently and you could charge the moon.
Click to expand...

The majority are garbage steam follow and small limits.

Any notice you're steam following or double popping these props you're done at most of these books.

Any streak you're limited to $100, then eventually peanuts.

Let me know when he starts concentrating on full game anything.
Last edited: Sep 21, 2022

P.S. Good luck getting a prorated refund (season) from RJ Bell when you have limited or no more outs. That's the reality of using a service the relies on props and derivatives to
show a positive result.
Last edited: Sep 21, 2022

Fezzik couldn't have been more correct when he says you can bet 3k at draftkings on women's volleyball and once you start winning they activate the doom switch.

What I don't get is how Brad Powers can bet millions there? 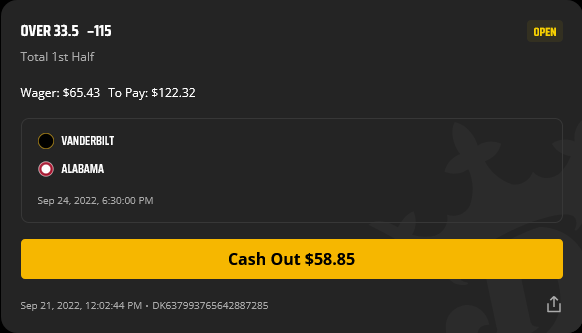 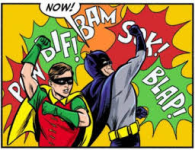 Tucker is right about the Texans....Fezzik still asleep on them.

Mills is better than people think and Lovie has that defense flying everywhere.

texaswizzard said:
Andy - BLAP??? They haven't had a BLAP client in over 3 years.
Click to expand...

Source? From what I hear the program is quite popular. Why would they be going through all that effort to text Bob the plays in advance, and keep the message thread live and active, if there were no subscribers?
T

Scam sports services do it all the time. Guys like Wayne Root, Jim Feist and Vegas Dave have these made up set of games and clubs like the Diamond Club and Whale Plays. I've seen scammer services put up on their websites that they have certain sets of games for High Rollers that range from 50K to 250K. RJ Bell's reputation for being honest is equal to a Carny at the Carnival. You and Fezzik need to go back to making your $90 player prop bets. Your brother would be living in some 2 bedroom apartment in a shitty neighborhood if he wasn't propped up by his 100K plus salary at Prescam.

ALL plays are widely available and time stamped for Computer Bob who can verify.

Fezzik said:
ALL plays are widely available and time stamped for Computer Bob who can verify.
Click to expand...

Fezzik said:
ALL plays are widely available and time stamped for Computer Bob who can verify.
Click to expand...

cambell should have punted. st brown was slowed with ankle, hard to convert 4th and 4 with his ankle, they had missed on previous 4th and 4. make 4th 4 39 pct, make 56 yd fg with that kicker, 48 pct.
F

I am struggling Railbird

Fezzik said:
I am struggling Railbird

I only have a best 12-3 in the Circa and Westgate
Click to expand...

Almost, but just 11-4 in Circa tied with my sole entry.
A

I remember the "glory days" of online gaming back in the late 1990's when they were throwing out 100% deposit bonuses, per deposit, and didn't ban you even if you were betting props with enormous value or just outright bonus hustling. Was literally impossible to lose. Very different environment now.

andyfezzik said:
I remember the "glory days" of online gaming back in the late 1990's when they were throwing out 100% deposit bonuses, per deposit, and didn't ban you even if you were betting props with enormous value or just outright bonus hustling. Was literally impossible to lose. Very different environment now.
Click to expand...

Steve is betting sides early, and at some VERY good numbers. A few examples from his Sunday wagering.

My constant nagging, trolling if you will has made Fezzik a little more transparent with lines (availability), and now more liquid sides (favorites of course).

The number have ALWAYS been available.

You just are living in 2004, with no clue who has evolved and who has not.
A 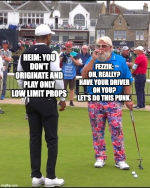 Fezzik needs to stop the bullshit on radio, 'we made the number' con.

He has no data base, nobody knows the source, unfortunately some get sucked in.

never bet hurricanes under, most Kanes are overstated and a climate science scam

railbird said:
most Kanes are overstated and a climate science scam
Click to expand...

Fezzik looks at his inflated units and starts believing his own hype.

So Saturday he plays full game sides and totals including a big mlb fav.

kane said:
Tell that to the people on the West Coast of Florida who just had their homes destroyed by the overstated science scam
Click to expand...

their homes were destroyed because they are sitting ducks on an island in hurricane alley. crazy place to build

God created the weather and the seas.